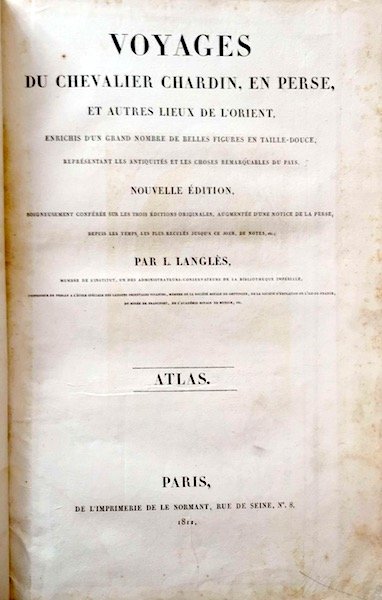 The Atlas 2 maps, + 63 plates (ten of which are folding including a map), contains engraved portrait by Macret after Loggan, original carton boards, lightly stained. Book plate G. Giraud verso front cover, copy in very good condition. This work was described by one of the greatest Orientalists of the eighteenth century, William Jones, as the best account of the Muslim nations ever published. Chardin's first voyage undertaken in 1655, he went as far as India but then returned to Persia where he stayed for six years mastering Turkish and Arabic, besides Persian, and travelling widely. In 1671 he again travelled to Persia by way of Smyrna, Istanbul, the Crimea and the Caucasus. He visited India a second time. This work has a profound influence on the philosophers and historians of his time. Besides his own observations, Chardin, based his remarks on information furnished to him by Pere Rafael du Mans, the French Capuchin monk who lived in Isphahan for over 50 years (1644-1696) and was the most knowledgeable westerner on Persia.