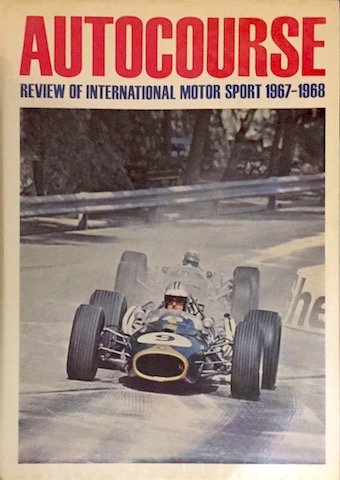 The 50th anniversary edition of Autocourse, covering the 2000 season.

Autocourse is a series of annuals covering motor racing, and Formula One in particular. The annuals cover a long period of the sport's history, from 1951 to the present day, and, as such, are highly collectible.

The first edition of Autocourse appeared in 1951, as a quarterly review of motorsport, initially with each article in four languages (English, French, German and Italian). Its aims were "to provide the most complete data obtainable with interesting and authentic information, settle arguments and provide countless hours of interesting study and amusement." The first Autocourse in annual form was published in 1959 as a paperback. The first hardback annual was 1961/62. In 1963, Jim Clark started the tradition of the F1 World Champion writing the foreword for the annual, a tradition only broken in 1991, when Senna refused following a dispute over the annual's Top Ten drivers.
Starting in 1966, the annual's editor (currently Tony Dodgins, who took over in 2016 after the death of long time editor Alan Henry) has chosen the Top Ten F1 drivers of each season. In 1991, the Formula One Review was changed into a team-by-team format. In 2000, Autocourse celebrated its 50th anniversary. In 2005, Bryn Williams took on the publishing of the annual with Crash Media Group,[1] who purchased the series from Hazleton Publishing (publishers since 1975).
In late 2009, CMG confirmed a deal to sell on the title to Icon Publishing (which was formed by Bryn Williams again with Steve Small who has a long established relationship with the annual from being the Picture Editor).

The front cover features a full-scale photograph of that year's F1 championship-winning driver in his car, underneath the distinctive yellow "Autocourse" title. In 1976, a drawing by Michael Turner was also used. In 1994 and 1995, three photos were used on the front cover. The interior title page often features the runner-up, or another photograph of note.

This has been written by the newly crowned champion since 1963 and is accompanied by their signature. The only exception was in 1991, when Nobuhiko Kawamoto, the chief of Honda's F1 engine programme, wrote it instead of Ayrton Senna, after Senna was not acclaimed the Number One driver in the annual the previous year, despite winning the title.

This is a page or so of material which summarises the year in motor racing from the editor's point of view. Since 1988, the editor has been Alan Henry; his immediate predecessor was Maurice Hamilton. For the 50th anniversary edition in 2000, the publisher, Richard Poulter, also wrote a brief introduction.

Top ten drivers
The annual states that these top ten F1 drivers are "chosen by the editor, taking into account their racing performances and the equipment at their disposal". This has been a feature of Autocourse since 1966. Drivers who do not complete the whole season are not usually eligible to be included in the list, although exceptions have been made.

Obituaries of persons involved in motorsport who have died during the past year. The 2008 edition included obituaries for Phil Hill, Ove Andersson, Paul Newman and Jean-Marie Balestre, among a few others. As Autocourse is published before the end of the year, persons who died at the end of the year are listed in next publication, for example the obituary of Clay Regazzoni was in the 2007 edition.

Formula One features
There are usually some in-depth articles on various F1 topics; e.g., rule changes. These are usually written by well-known motor racing journalists, for example Nigel Roebuck.

This is the main section of the annual. Before 1991, this consisted of an in-depth analysis of the season as a whole, followed by technical reviews of each team and chassis specifications.

From 1991 onwards, the Formula One review was organised in a team-by-team format, with the analysis, specifications, an illustration of each car and photos of the relevant drivers (and team personnel) in a single team's section.

This is the longest section of the annual, and contains a report on each Grand Prix in the Formula One season, including qualifying, photos, comprehensive results and sidebars for more in-depth news stories.

This consists of the full results table for the season, featuring each driver and accompanied since 1996 by a group photo of all the drivers in one of the Grands Prix. Other statistics are also given, such as overall career details for each driver and their average qualifying position over the season.

Every year, a review of junior single seater formulae is included (currently GP2, GP3 and Formula Three), as well as reports on the year's international sports car racing, and the American racing scene (comprising NASCAR, IndyCar Series and IMSA SportsCar Championship). The current annuals are over 300 pages long.